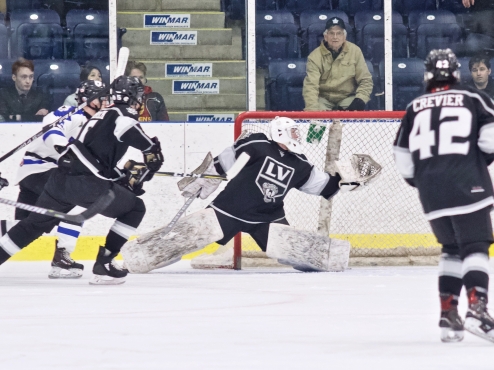 LONDON  – The LaSalle Vipers got behind early to drop their first playoff game 6-2 against the London Nationals in the opening round of the Western Division semi-finals Wednesday.

London defence man Austin Jeffers opened scoring less than less three minutes into the game with the Vipers still adapting to the international-size ice surface at the Western Fair arena.

Vipers’ rookie Zane Dalpe evened it up less than two minutes later with a steal in the neutral ice and a breakaway goal unassisted.

London defence man Noah Tooke restored the lead less than two minutes later and Nationals’ forward Cal Davis stretched that lead out late in the period. The Vipers played from behind the rest of the way.

“We have to be more prepared at the start of the game,” said Vipers’ head coach John Nelson. “We gave up too many breakaways.”

There’s always going to be adjustments needed to use angles on the larger ice surface more effectively, but Nelson thought the Vipers’ speed matched London’s throughout the game.

Nelson was confident the team will bounce back for game two at home Friday at the Vollmer Centre. “We’re a resilient group and our guys will be ready to go Friday. We’re a tough team to play against at home.”

Outshot 39-25 by a Nationals’ team with a potent offence all season, Vipers’ goalie Will Tragge was outstanding, particularly through a scoreless second period.

“I thought he had an excellent game,” said Nelson of Tragge. “He’s been solid for us all year.”

The Nationals opened up a three-goal lead with a breakaway goal by forward Max Vinogradov early in the third period.

Vipers’ captain Brett Vorshuk narrowed the gap about midway through the period, burying a pass from Jack Bowler at the side of the net.

But that was as close as it got.

Vorshuk, left alone in front of the net for a chance to chip one by London goalie Zach Springer, and A.J. Ryan on a breakaway probably had the best chances to get the Vipers back in the game.

A strength in the Sarnia series, the Vipers’ power play was 0-6 in this one.

London added a third period power play goal from Vinogradov and James Turner closed out the scoring for the Nationals.